The group QD has announced Break as its new charity partner.

All fundraising efforts from the staff and in-store activities will be donated to the East Anglian children’s care charity, which provides young people on the edge of care, in care and moving on from care with a healthy childhood and the life-long support they need to enjoy a bright and successful future.

Fundraising activities are kicking off throughout QD’s stores in the region, including collection tins and all proceeds from carrier bag sales.

Staff across the stores, head office and distribution centre are also getting behind Break, hoping to raise funds through events and outdoor challenges as the year progresses and COVID-19 restrictions ease.

The charity partnership is set to last for three years.

Keep your eyes peeled later this year for Quality Discount Dino-tastic appearance on the Go-Go Discover Trail around Norwich.

Do you think he saurus?

Find out more about BREAK here. 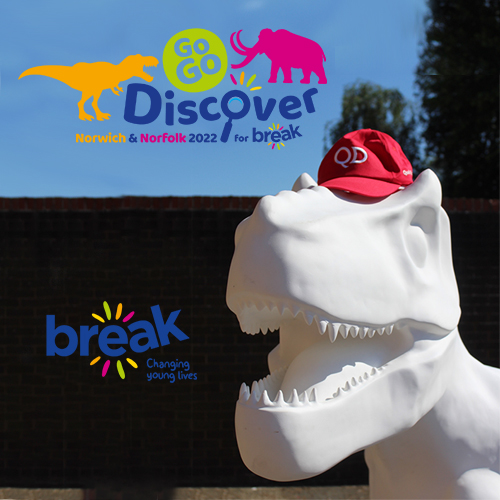 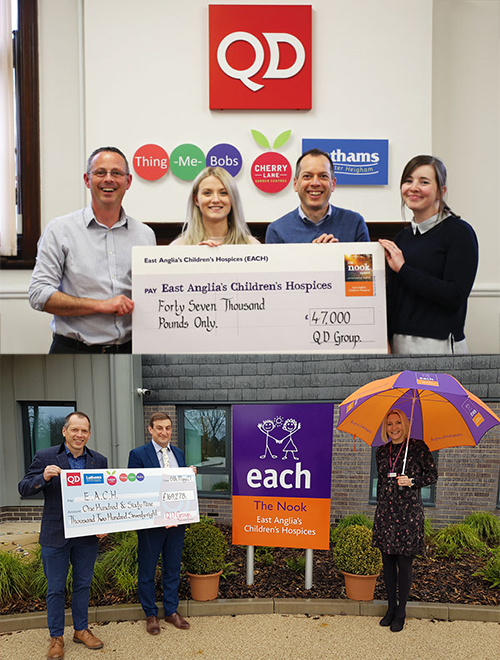 QD Stores Ltd signed up to the nook business network in April 2015, pledging to raise £25,000 to help EACH build a new children's hospice for families in Norfolk.

Since then the company have worked hard with stores across the region raising money via skydives, bake sales, head shaves, coastal walk challenges, climbing the O2 and much more. On Wednesday 12th July 2017, Associate Director of Trading James Collins and Co-ordinator David George from QD Stores presented EACH Fundraiser Sophie Mayes with a cheque for £37,630. This, combined with a cheque for £14,000 presented last year, brings the total raised by the discount retailer to £51,630.

However, fundraising activities at the retail group really took off and, after deciding to retain EACH as its corporate charity for a further two years, QD has just announced the grand total raised comes to £169,278.

James Collins said: "At QD stores we are delighted to support the nook appeal. We set out to raise £25,000 and we are all over the moon that we have smashed our target. Our customers have also been brilliant in helping us in our quest to raise money for this excellent cause. We've had collections tubs at tills across our 45 stores and garden centres, and we have also been able to donate some of the money from the sale of our carrier bags."

Sophie from EACH said: "We want to say a huge thanks to everyone at QD Stores. They have been fantastic and their staff and customers have really got behind the nook appeal. We still have a way to go towards our £10 million targets but the support we receive from the community all adds up."

Find out more about EACH here.

An intrepid team of employees from East Anglian discount retailer QD, has raised over £8,000 for two local charities by completing a gruelling 24-hour Three Peaks Challenge.

The challenge saw 15 staff from QD's head office, QD Stores, Lathams and Cherry Lane Garden Centres across the region, climb the highest mountains in England, Scotland and Wales in 24 hours. The team, who started training for this in March, tackled Ben Nevis, Scafell Pike and Snowdon. The expedition was a total of around 44 km (27 miles), with a total ascent of 11,100 feet, not to mention 460 miles of driving in between.

Money raised from the QD 24 hour Three Peaks Challenge has been donated to East Anglia's Children's Hospices (EACH) which has been QD's charity partner since 2015. To date, QD has raised more than £101,000 for EACH's nook appeal.

Funds have also been raised during the Three Peaks Challenge by Refit Manager Pete Bell from QD's Norwich head office, for the Neonatal Intensive Care Unit (NICU) at the Norfolk & Norwich University Hospital. In November, Pete's wife went into premature labour and gave birth to their son Harrison at just 24 weeks and three days. Harrison weighed only 1.5lbs and was immediately transferred to the NICU. Pete and his family have since been doing their own fundraising by way of thank you for the amazing care given to Harrison who is now home with his family and doing well.

Simon Bacon, SAP Operations Manager at QD, team leader and organiser of the 24 Hour Three Peaks Challenge, said "To complete the Three Peaks in 24 hours meant that we had to climb each mountain very quickly. It was extremely painful at times but we're a great team and pulled each other through. And it was worth it! We were rewarded with views that will stay with us forever and donations for our charities that have humbled us all."

The initial target set by the team was £5,000 but thanks to the generosity of friends, family and the general public.

Find out more about EACH here. 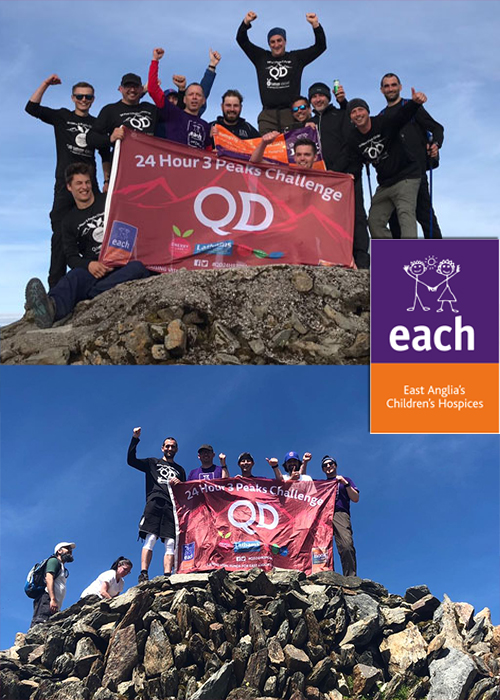 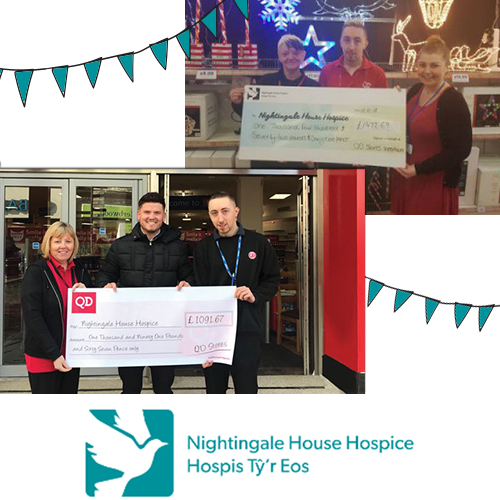 A discount retailer in Wrexham town centre has raised over £1000 for a local hospice. QD Stores, located on Hope Street, raised the funds for Nightingale House through sales of its five pence plastic carrier bags and decided to donate the money to a very worthy local cause chosen by the store team.

Nightingale House provides specialist palliative care services, completely free-of-charge, to patients and their families across a wide area stretching from Wrexham, Flintshire and East Denbighshire to Barmouth and the border towns including Oswestry and Whitchurch. A total of £1,091 was raised in aid of the hospice.

The store has since donated an additional £1,472.69 to the local hospice thanks to the support of its customers.

We are so proud of our Wrexham team and grateful to all the wonderful customers who helped in achieving these donations.

The QD Group have for several years been supporting the Brain Tumour Research Campaign with their nationwide fundraising campaign, Wear A Hat Day.

We're very proud that over the last 3 Wear A Hat Day events, the QD Group have raised over £7,544! This amazing amount has enabled the Brain Tumour Research charity to fund the equivalent of two full days of research at one of their Centres of Excellence, which was recognised in November when two tiles were placed on the Wall of Hope at the Brain Tumour Research Queen Mary University of London Centre of Excellence by a representative of the QD Stores Group.

Brain Tumour Research is committed to fund sustainable research into brain tumours: the biggest cancer killer of children and adults under the age of 40.

It supports the UK’s largest dedicated group of laboratory-based scientists progressing world-class research into brain tumours, to improve treatments, survival rates and quality of life for patients and ultimately find a cure. 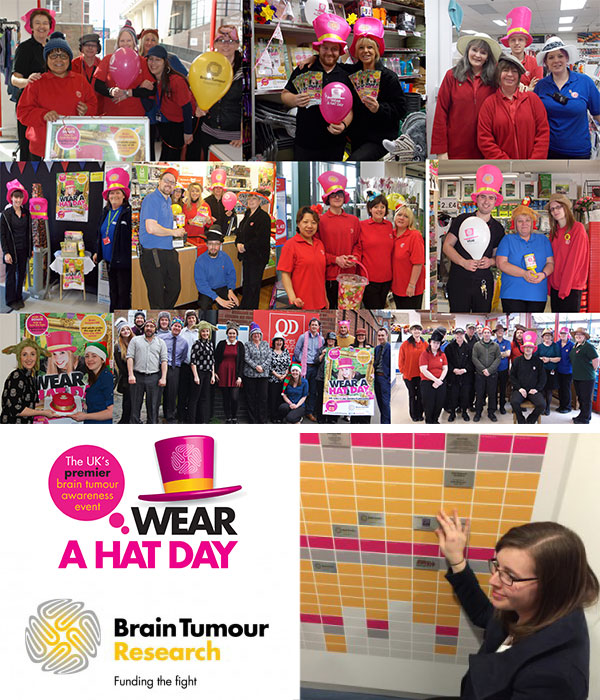 We use cookies, which are small text files, to improve your experience on our website and to show you personalised content.
You can allow all or manage them individually.